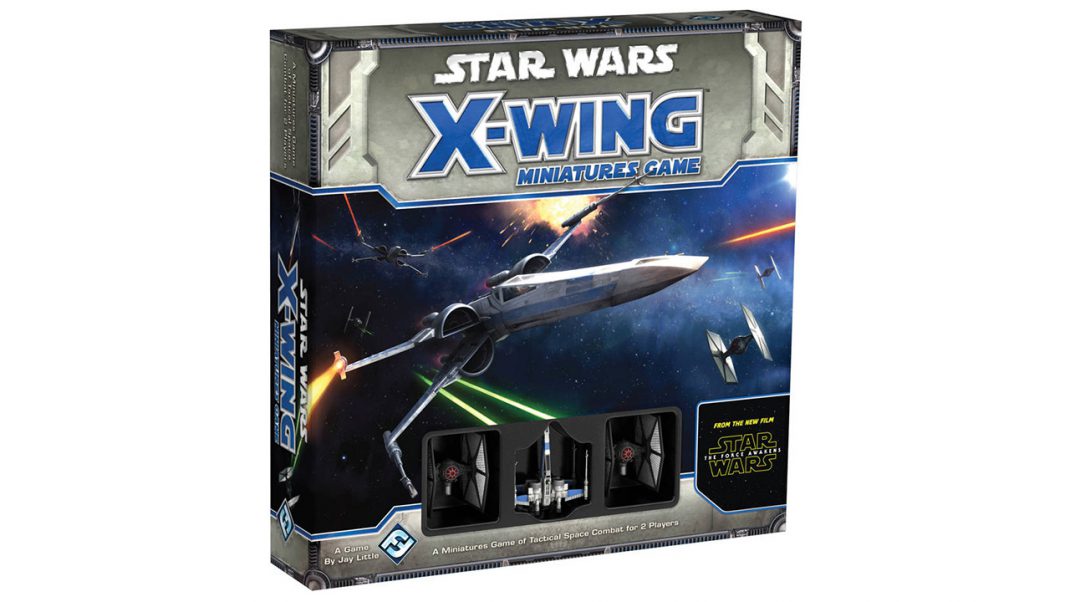 The Star Wars X-Wing Miniatures Games from Fantasy Flight Games is not only an excellent strategy game but, also, a perfect game for Star Wars fans in general. What’s cooler is that the game is played with small, detailed miniatures of ships from the Star Wars universe. Players send their X-Wings, Tie Fighters, and a whole lot more up against one another to see who is a better tactician. Starting out with X-Wing is fairly simple as all you need is the $40 dollar starter kit. This kit contains revamped (post-The Force Awakens) rules as well as two First Order Tie Fighters and one T-70 X-Wing fighter to throw against one another in combat.

Each ship, modification, and crew member costs a certain number of points. Usually, each side gets a pre-determined number of possible points for the players to work with in setting up their squadrons. In our office, we usually give 100 points per side as we have several people playing (but more on that later). After the sides are configured, the play space is agreed upon (usually a 3 foot by 3 foot area) and the miniature spacecraft get deployed. 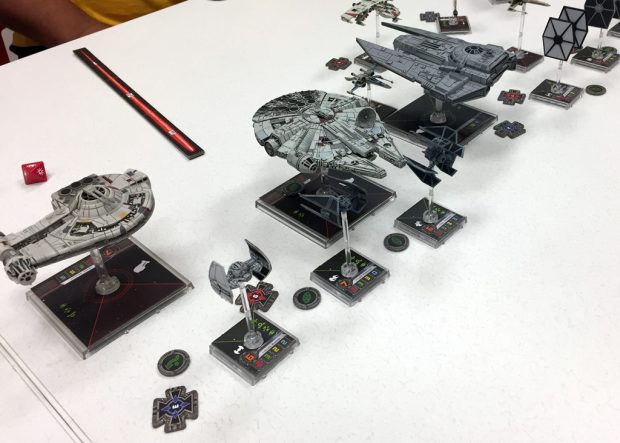 Each side selects maneuvers to be performed by each ship in their squadron. These maneuvers are selected via “maneuver dials” which come with each miniature ship purchased. Fast ships like the A-Wing can traverse greater distances, while more maneuverable ships like the Tie Fighter can perform sharper turns. Certain maneuvers are displayed as red instead of white, meaning that it is harder to pull off. These maneuvers cause your pilot “stress”, which prevents them from performing another red maneuver until an easy “green” maneuver is performed. The selected dials are placed face-down so that the other player cannot see what you are planning. Then maneuvers are performed in descending order of pilot skill (listed on the pilot’s card), always starting with the Imperial side. After each ship movement is complete, that ship can perform an action as listed on their pilot cards. These actions can be to “focus” for the chance at greater damage on the enemy in the forthcoming combat phase or “evade” which grants additional chances of dodging enemy fire (there are other action types, but you get the idea).

After the movement phase is complete,the combat phase begins and ships, in ascending order of pilot skill, can attack their targets. Targets have to fall within a ship’s firing arc and range to be eligible for attack. The starter kit will provide a measurement tool to figure out if a target is within range and arc of the player ship. Each ship has a different attack and defense rating – representing how many dice will be rolled for either action. The attacking player will first roll dice to see if any of their attack dice hit (can be standard or critical damage) and then the defending player rolls their defense die to mitigate that potential damage (or evade it altogether if they are lucky). After the combat phase, the game goes back to the movement phase and it starts all over again. This continues until victor conditions are met for either player. 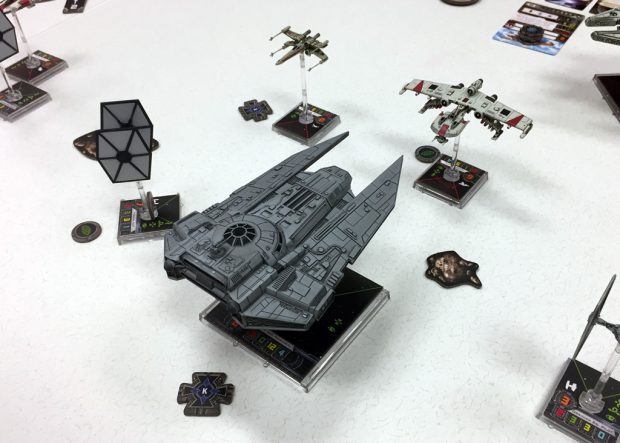 These are just the bare basics of the game, but are enough to give you the general idea of how it is played. Most games are played force-on-force, winner take all. However, some creative folk setup scenario-based objectives. These could be anything from satellite capturing to protecting the Millennium Falcon so Chewbacca can make it to his annual Life Day celebration. Technically, the X-Wing Miniatures Game is meant for two players – however, you can easily play it, comfortably, with four players. Each player will control a subset of ships on their team. This method of play takes a bit longer for everyone to decide what they are going to do, but can lead to some great banter between players as well as teamwork and “strategery”! Overall, Star Wars X-Wing Miniatures Game is a terrific game of strategy and dice rolling that is sure to please not only Star Wars fans, but also fans of strategy boardgames and war games. The Force Awakens Core Set for the X-Wing Miniatures Game retails for $39.95 and is available now. Also available are a host of additional ships that you can purchase – even “large” and “huge” ships if you want to add an entirely new level of strategy to your games!