You cant help but watch Attack On Titan and think “This needs to be a game!”. The Omni-directional gear alone screams from Bionic Commando’s past and the swordplay and aerial assaults across a walled-in, fortified city are begging for a videogame. And a relatively decent title is what it got!

Attack On Titan follows the characters from the series as the follow the story line from season 1. You start off as Eren but eventually cycle through Armin, Mikasa, and Levi as well. The cut scenes that go along with the gameplay are wonderfully animated and are very easy to get lost in as you begin to feel for the characters (as bad as some of their personal choices seem to be at times). 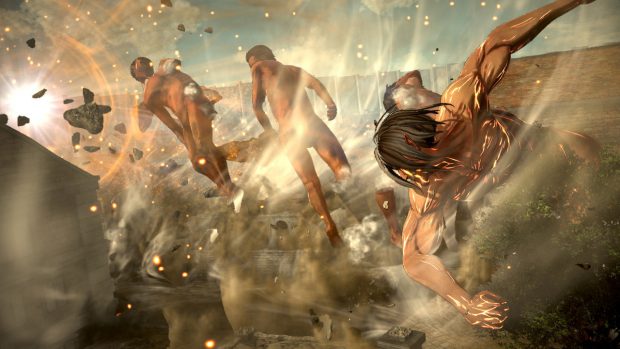 The Omni-directional gear in the game is near flawless, really giving you the feeling that you’re careening through the city. However, it can at times be difficult to judge where exactly you’re locking onto when going from building to building and can at times drop you at the foot of a building, completely ruining your momentum, so the ODG takes a lot of practice. Once you get the hang of it, navigating the map becomes a lot more fluid and quick. You also need to keep an eye on your gas meter for those extra boosts when subjugating Titans or traversing the city. You can purchase more gas if you run out or pick it up from fallen comrades or by doing small sub-missions during your battles.

Using the ODG is imperative to managing your way across the city and battling Titans. It can be a test of patience though when attacking multiple Titans within an enclosed space. Attacking Titans in alleyways or between two close buildings can be a pain at times as you attempt to lock on to the correct Titan, the correct body part, and be in a position to do so. It’s tough to not accidentally catch a wall or the wrong body part of a Titan simply because there’s so much going on in such a little space, especially if the Titans you’re going after are moving quickly. And sometimes going after body parts before going for the kill can be incredibly important since some Titans carry supplies attached to legs or arms so being on target becomes an act of futility. It’s best to take them on in wider areas but sometimes, it’s just not possible to get them where you want them to go. 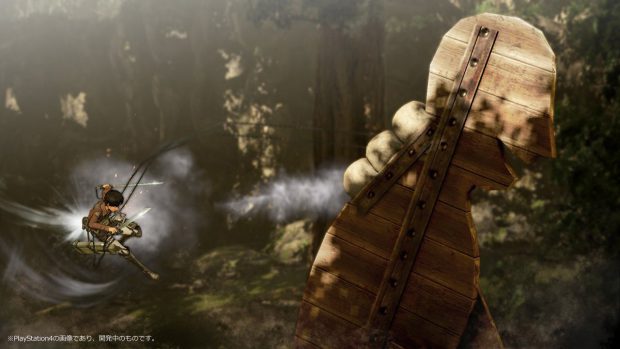 The amount of button combinations when attacking Titans can be a handful to remember. Along with that, you’re getting orders and communique from your fellow guards and teammates but since all the game is in subtitles with Japanese voiceovers, it can be easy to miss an important instruction or available power-up, simply because if you don’t speak Japanese, you may not have a moment to take your eyes off the action to read the subtitles. Though they’re usually not directly affecting your current mission, I kinda felt like I was blowing through the story without doing any side missions which is something I like to do instead of finishing a game as fast as possible (this is why I’m still playing Fallout 4’s main storyline). Along with that, important pop-ups are displayed, pausing the game for you to read. But if you’re in an assault-frenzy, it’s very easy to accidentally skip through these simply by hitting a button you were smashing just before the message popped. Once again, it gives you the feeling that you may be missing more of the gaming experience that was intended.

At times, your teammates can die on the battlefield which can lead to them dropping valuable gear which you can collect for your characters. The downside to this is the items aren’t very well highlighted so they can be easy to miss laying on top of the small human body amongst the towering buildings and Titans. Along with that, you can’t just run over the items to retrieve them. You have to press an action button to pick them up which, since all pick-ups in the game are valuable, has no relevancy anymore in choosing to pick things up. This should be an automatic thing when your character walks over them since stopping to hit a button to pick-up yet again slows down the intense pacing of the game. 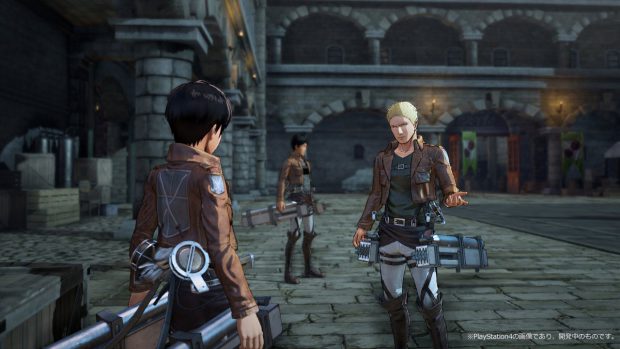 Subjugating Titans can be a lot of fun however there’s not much more to the meat of this game. You’re pretty much doing the same thing with each character (aside from when you’re in control of a Titan, of course). It may be an excellent game for those who are fans of the series, getting to walk in the shoes of the main characters. However, Attack On Titan can become rather tedious after a while as you continue to subjugate Titans, pick up items, help out teammates, and the like, again and again. There’s just not enough in the game to really make it special for the casual gamer looking for something new in an adventure title. Still, Attack On Titan is a very fun game and for as insane as ODG and catapulting yourself across a city to fight giant human-like creatures pent on destroying your city can be, it is incredibly smooth and seamless and taking down Titans feels as triumphant as it should. If you’re a fan of the anime, you’re not going to want to miss this by any means. You will not be sorry!