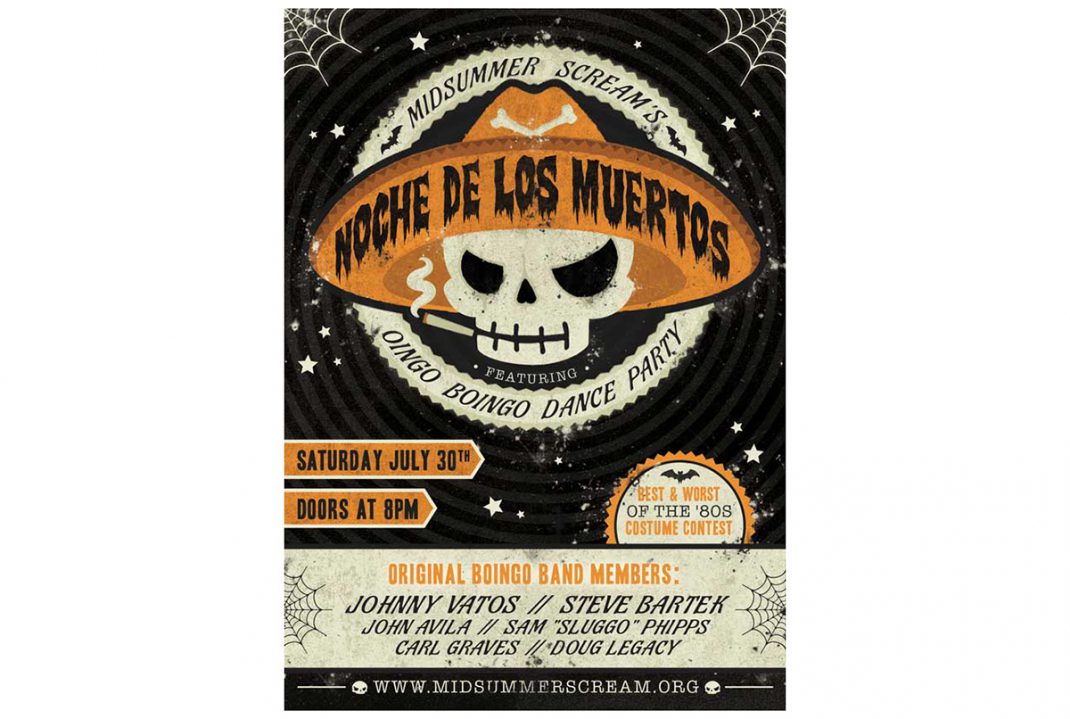 LOS ANGELES, May 11, 2016 – Let’s have a party, there’s a full moon in the sky! Midsummer Scream is thrilled to announce Oingo Boingo Dance Party will headline its Noche de los Muertos (Night of the Dead) celebration and costume contest at the Long Beach Convention Center Saturday evening July 30th, 2016.

Oingo Boingo Dance Party is comprised of former Oingo Boingo members Johnny Vatos, Steve Bartek, John Avila, Sam “Sluggo” Phipps, Carl Graves and Doug Lacy, along with a host of other wildly-talented musicians that keep the legacy of the iconic band alive and thriving for fans of multiple generations.

Known for their unique sound which includes explosive percussion, electrifying guitar riffs and a full horns section, Oingo Boingo’s extensive song catalogue includes Only a Lad, Little Girls, Weird Science, No One Lives Forever, and the venerable Dead Man’s Party. The band hosted Halloween shows in Irvine each year at the height of its popularity, with thousands of “Tender Lumplings” – the given nickname for their adoring fans – showing up in costumes and skeletal makeup, as the underlying thematic style of the group commonly centered around Dia de los Muertos.

“Oingo Boingo was synonymous with Halloween here in Southern California in the ‘80s and ‘90s,” said Rick West, Creative Director of Midsummer Scream. “What better way to launch our event than a concert featuring these legendary performers doing what they do best as Oingo Boingo Dance Party? To me, bringing these musicians and the haunt and horror community together under one roof is a no-brainer. They’re going to bring the house down!”

Oingo Boingo Dance Party will headline Midsummer Scream’s 21+ nighttime event, Noche de los Muertos, featuring a Best & Worst of the ‘80s Costume Contest, which will be judged by the band members themselves during the middle of their 90-minute concert performance. Midsummer Scream attendees are encouraged to dress up in their best – or worst – ‘80s Halloween costumes and strut their stuff across the stage as Johnny Vatos, Steve Bartek, John Avila, Sluggo and the gang cast final judgment!

For the ultimate Boingo fans in attendance, a limited amount of “Tender Lumpling Experience” passes are now available for purchase, which offers admission to the Noche de los Muertos party, as well as a personal meet-and-greet opportunity with the band that includes photos and autograph signing prior to the concert.

“Having Oingo Boingo Dance Party as part of our event was something the team wanted to do from the get-go,” said Gary Baker, Executive Producer of Midsummer Scream. “Very quickly, Johnny Vatos and the band were interested, which set everything in motion. We’re going to put on a show that no one will soon forget.”

Face-painters will be on hand to transform guests into fearsome skeletons or sweet sugar skulls if they’d like before and during the party for a small price – perhaps a golden coin, or a shiny silver dollar on either eye.

Tickets for Noche de los Muertos featuring Oingo Boingo Dance Party are now on sale at www.MidsummerScream.org, and will be sold throughout the day Saturday July 30th including at the door. Tender Lumpling Experience passes will sell out extremely fast – there is a frightfully limited supply!

Tickets are now on sale, with new information regarding Midsummer Scream is being updated frequently at MidsummerScream.org.

Fans may sign up on the site for email notifications and announcements, including discounts and other special offers.  Be sure to follow Midsummer Scream on social media as well – Twitter/Periscope: @MidsummerScream, Instagram: @MidsummerScream, and Facebook: facebook.com/midsummerscream.