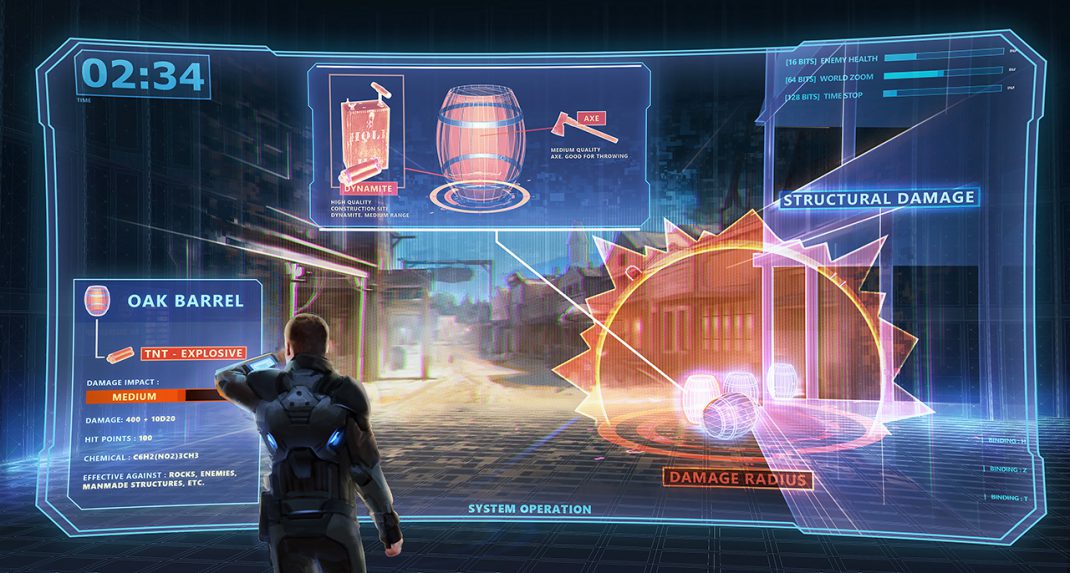 April 25, 2016 — John Romero and fellow id Software co-founder Adrian Carmack proudly announce BLACKROOM™, a visceral, varied and violent shooter that harkens back to classic FPS play with a mixture of exploration, speed, and intense, weaponized combat. Use fast, skillful movement to dodge enemy attacks, circle-strafe your foes, and rule the air as you rocket jump in the single- and multiplayer modes. Powered by Unreal Engine 4 and fully moddable on PC, the game is being developed with community at its core, starting with today’s launch of a Kickstarter campaign to fund development.

In the single-player campaign, step into the shoes of Santiago Sonora, Chief hNode Engineer at HOXAR™, Inc., the world’s foremost creator of holographic simulations. The company’s exciting BLACKROOM™ technology allows users to be anywhere at any time, creating fully-realized holographic worlds that are indistinguishable from reality, all inside of a giant black room. When testing of their new leading-edge Predictive Memory technology reveals troubling anomalies that blend the real world with the virtual, you’re sent in to investigate and are swept across a staggering and dangerous array of simulations developed for BLACKROOM™ users, from medieval castles to horror sets. Peering into your mind and tapping into your deepest memories and fears, however, it’s clear that the BLACKROOM™ is not all fun and games.

Adrian, who got his start with John in 1990 at Softdisk before going on to co-found id Software, echoed Romero’s comments.  “It’s been great working with John again, and we’re really setting out to produce a visceral FPS,” said Adrian Carmack, art director at Night Work Games. “Because of the BLACKROOM™’s setting, we have a lot of freedom to create environments that players might not expect in an FPS. BLACKROOM™ technology lets its users enter just about any universe imaginable, and gives them the power to alter the world. That gives me lots of artistic freedom.”

BLACKROOM™ is targeted for release in winter 2018 on PC and Mac, DRM-free and on Steam. The team today launched its Kickstarter campaign, which will help the team fulfill and expand upon its ambitious plans and gives the community a unique opportunity to get directly involved in the game’s development. Visit the Kickstarter page https://www.kickstarter.com/projects/nightworkgames/blackroom-a-new-fps-from-romero-and-carmack?token=07458251.

Night Work Games, the dark and violent subsidiary of Romero Games, is home to a group of dedicated, fun and experienced game developers based in Galway, Ireland. We create and develop the type of games that we love to play.