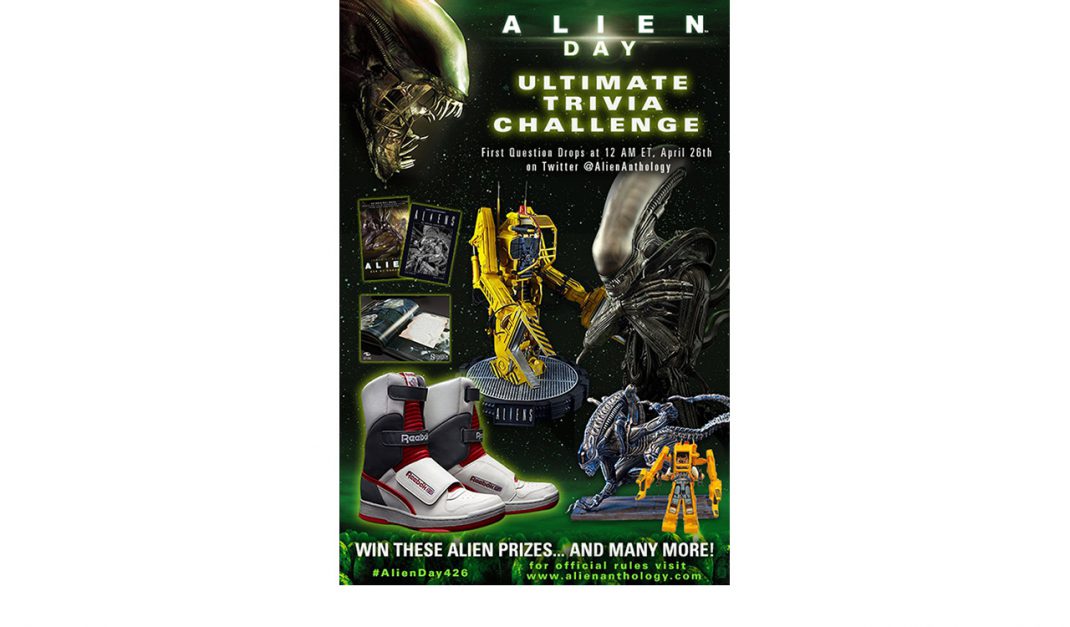 ALIEN DAY (#AlienDay426) kicks off at 12 AM ET on April 26th with a 24-hour Twitter contest in which every 42.6 minutes a new ALIEN trivia question will be presented via the official Alien Anthology Twitter account, @AlienAnthology.

o   In advance of the trivia contest kickoff, fans must pre-register their Twitter handle at ALIEN Anthology (http://AlienAnthology.com), and to qualify to win corresponding prizes, participants must “Reply” to the initial “question tweet,” correctly answer the question, and include the hashtags #AlienDay426 and #Contest. A winner (or “winners” when multiple prizes are offered) will be selected for each of the questions. Please refer to “Official Rules” for additional detail.

On April 26th the ALIEN franchise returns to theaters in 20 cities, including Austin, New York, Los Angeles and Dallas as participating Alamo Drafthouse locations and partner venues showcase double-features of ALIEN and ALIENS. To accommodate the interest, additional screenings were added and promptly SOLD OUT; limited tickets however are still available for certain screening locations. Further ticket detail here: https://drafthouse.com/event/aliens

o   Additionally, in New York, Academy Award-nominated and Golden Globe-winner Sigourney Weaver (Ellen Ripley) will be on hand for a screening of ALIENS at New York City’s Town Hall. This screening will feature a host of Xenomorph mayhem, including custom video pre-shows and a Mondo ALIEN T-shirt designed exclusively by Jay Shaw available for purchase.

o   In Los Angeles, the Alamo Drafthouse presentation of ALIENS at the Theatre at Ace Hotel will include a Q&A hosted by Matt Gourly featuring cast members Jenette Goldstein (Private Vasquez) and Carrie Henn (Newt).

One of the most-requested licensed products, the Reebok Alien Stomper worn by Sigourney Weaver as Ellen Ripley, as well as the mid tops worn by Lance Henriksen as the Android Bishop, are being released by Reebok in limited edition to mark ALIEN DAY. The iconic movie sneakers will be available beginning April 26th at Reebok.com and select Reebok stores worldwide.

o   NECA Action Figures – The first-ever Private Vasquez (Jenette Goldstein) and Newt (Carrie Henn) figure, as well as the release of a Kenner toy-Inspired Ellen Ripley figure, will be available to honor the day.