Recently, we got the chance to experience “Peek A Boo”, the latest escape room challenge from the folks at Live Game Escape in Las Vegas, Nevada. Entering the small office space, we were very curious about the challenge that awaited us. We were greeted by some very friendly staff and directed to fill out waivers int he waiting area near the check-in desk. Once we were completed in our writing, they gathered us all together and began to lay out the story of Peek A Boo…. 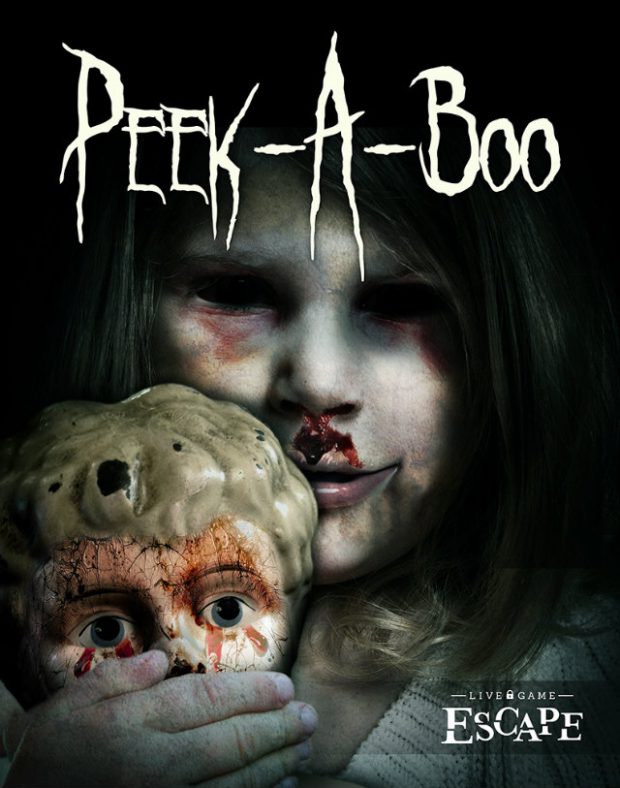 “As a team of Supernatural Investigators, you and your partners are hired by the local community to investigate a Daycare that was shut down recently for your Spirit Removal Service. You entered the facility without any of your equipment for an initial screening, then suddenly…BOOM! The door locked shut behind you. It just would not budge at all! Your only option is to put your brains together to get out of the place! Find your way out by clearing out the lingering spirits inside!”

Excited at the story, we all silenced/shutdown our cellphones, and prepared to enter. We were provided with one small flashlight and one walkie-talkie to call for help if needed. We took our supplies and entered the room. It appeared like a normal child’s room. Toys were strewn about and there was a radio which doubled as a countdown timer in one corner of the room. In order to escape, we had to solve a series of logic puzzles – clues were provided by a tablet which controlled a hidden lock. We didn’t officially escape – but only because we were talking so loud that we did not hear when, after we answered everything correctly, the escape key to dropped onto the floor…. So, my advice to you would-be escape artists is to effectively communicate with one another and listen to your environment. Hints can come from anywhere and can be both audio or visual in nature.

Overall, Live Game Escape has created an effective escape room that will challenge and delight. It was creepy and, at the same time, not so intense that those afraid of haunted houses would not be able to visit. It is worth noting that it gets pretty hot in there so be sure to dress accordingly. Each ticket to the Live Game Escape Las Vegas costs $35 dollars, which is well worth the money and in keeping with most escape room challenges – at least, here in Southern California. That was the first escape room we visited in Las Vegas and we want to thank them for having us out!