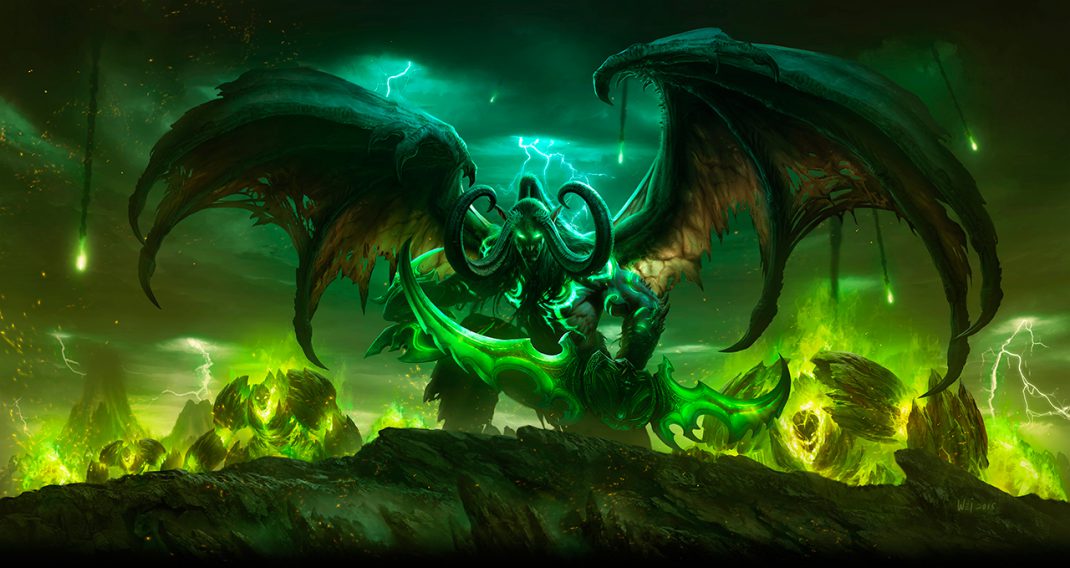 The Legion Invades World of Warcraft on August 30

IRVINE, Calif.—April 18, 2016—The great enemy of Azeroth is back, and soon the kingdoms of the Horde and the Alliance will be consumed in a storm of fel fire. Starting August 30, realms will shatter, heroes will fall, and the world will stand on the brink of destruction with the launch of World of Warcraft®: Legion™, the sixth expansion for Blizzard Entertainment’s acclaimed massively multiplayer online role-playing game.

Defenders of the Alliance and the Horde can steel themselves for the return of the demonic armies of the Burning Legion by pre-purchasing World of Warcraft: Legion digitally at www.wowlegion.com. Players who pre-purchase will unlock an instant level-100 character boost, as well as early access to the Demon Hunter—Legion’s dexterous and deadly new hero class—prior to the expansion’s release.†

“Legion opens a dark and thrilling new chapter in one of the Warcraft series’ greatest conflicts, and things will never be the same for some of Azeroth’s most iconic heroes and villains,” said Mike Morhaime, CEO and cofounder of Blizzard Entertainment. “This expansion is loaded with features and content that give players whole new ways to explore the world and customize their heroes. We’re looking forward to sending everyone into battle against the Burning Legion this August.”

In this expansion chronicling the events following Warlords of Draenor, all hellfire breaks loose when the warlock Gul’dan, betrayer of the orcs and twisted servant of the Burning Legion, unleashes a demonic invasion force upon Azeroth unlike any the Horde and the Alliance have ever faced. To save their world from annihilation, heroes must unlock the mysteries of the mythic Broken Isles, master powerful Artifact weapons, and strike a forbidden pact with the Demon Hunters of the Illidari—vengeful disciples of the dreaded Illidan Stormrage.

Pre-purchase Now and Prepare for the Invasion

World of Warcraft: Legion will be available in a Standard Edition (physical and digital versions available; SRP $49.99). Players also have the option to upgrade their pre-purchase to the Digital Deluxe Edition (SRP $69.99), which contains a hoard of in-game bonuses for a variety of Blizzard games, including an Illidari Felstalker mount and pet for World of Warcraft, a Felstalker mount for Heroes of the Storm®, a helm transmog and wings for Diablo® III, and a pair of fel-infused StarCraft® II portraits.

Players who pre-purchase either the digital Standard Edition or Digital Deluxe Edition of Legion through www.wowlegion.com will be able to immediately† boost one character to level 100, allowing them to experience the latest World of Warcraft content alongside their friends.††

Pre-purchasing Legion will also grant early access to the Demon Hunter prior to the expansion’s release.† During the pre-launch early-access period, players will be able to complete the Demon Hunter’s unique starting experience on the shattered, Legion-corrupted world of Mardum and achieve level 100, leaving them fully prepared to join their allies on the Broken Isles the moment the expansion launches. Further details on the upcoming Demon Hunter early-access period, including the timing and duration, will be announced at a later date.

World of Warcraft: Legion will also be available in a retail-only Collector’s Edition (SRP $89.99), which includes the digital bonuses from the Digital Deluxe Edition along with a full-color hardcover art book, a behind-the-scenes two-disc Blu-ray/DVD set, a CD soundtrack, and a Legion mouse pad. Supplies are limited; players should check with their local retailer for preorder details and availability.

World of Warcraft: Legion is filled with features and content that will transform Azeroth’s heroes into Legion-slaying avatars of vengeance, including:

For more information about World of Warcraft: Legion or to sign up for the upcoming beta test, visit www.wowlegion.com.

With multiple games in development, Blizzard has numerous positions currently available—visit http://jobs.blizzard.com for more information and to learn how to apply.

†Players upgrading from World of Warcraft Starter Edition must wait for trial restrictions to be removed (up to 72 hours) before using character boost. Demon Hunter early access timing will be announced at a later date. Only one Demon Hunter per realm (per account); requires at least one level-70 character on realm.