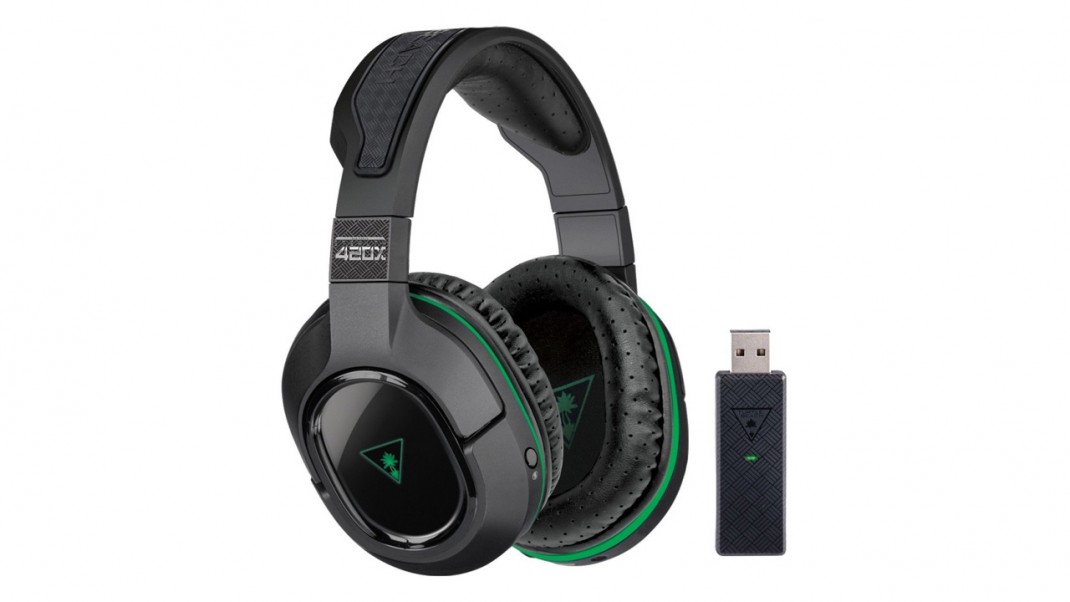 Turtle Beach, one of the premier video game headset manufacturers, has just released a new wireless headset for the Xbox One, the Ear Force Stealth 420X Headset (shortened to the 420X for the rest of this review).  The 420X might just be one of the best headsets I have ever owned, and most definitely the best one I’ve had for a console.  The headset fits quite nicely, never pinching nor feeling to small for my head, and is incredibly comfortable to wear for hours of gaming.

The 420X is completely wireless while in use, the only cord that comes in the package is used to connect the headset to the Xbox One for charging.  Using a USB wireless connector, the 420X stays connected for up to 30ft, which is perfect for me to grab a soda from the garage and still be able to talk between online games.  All the controls for the 420X are on the headset, including game and voice volume, bass boost, mute, and a button for presets.  The power button is on the right ear cup, dead center so you can easily feel for it and turn it on or off while the headset is being worn.  The 420X also features a removable omni-directional boom mic, so you can use your headset for music or mobile gaming.

I love the fit of the 420X on my head.  Comfort for me is pretty high on my must have list for gaming headsets, if the headset hurts after a few hours of gaming, then it just isn’t a good quality headset.  The 420x has synthetic leather ear cups that fit over the ear, keeping outside noise to a minimum while keeping your ears from sweating.  I also love how the ear cups swivel to match the shape of your head. I was able to use the 420X extensively over my testing period, focusing on a few different types of games.  Games like Dark Souls 2, The Division, Black Ops 3, Far Cry Primal, and Borderlands 2 sounded fantastic through the headset.  During multiplayer, I was able to hear footstep directions to give me a better indication of where my opponents were.  With single player games like Dark Souls 2, the music and sound effects really came through nicely and added to my immersion into the game.  Voice communication was clear with no issues at all, though finding the mute button was somewhat difficult at times.  I guess my only complaint with the 420X really is that it was hard to find the controls while the headset was on.  Feeling for the mute button was difficult, and I had a hard time remembering which volume control wheel controlled which volume.

The Ear Force Stealth 420X Headset by Turtle Beach is the best headset I have ever used for the Xbox One or Xbox 360.  The wireless connectivity is a must with my current living room set up, the voice communication was clear, and the headset was incredibly comfortable to wear over long periods of time.  I do wish the controls on the ear cups were a little easier to use or the buttons and wheels separated over both ears, but that is a fairly minor issue unless you are adjusting these items constantly during game play.  The price is set to be around $150 MSRP, which could be considered a little steep, but worth it if you are looking for a quality wireless headset.