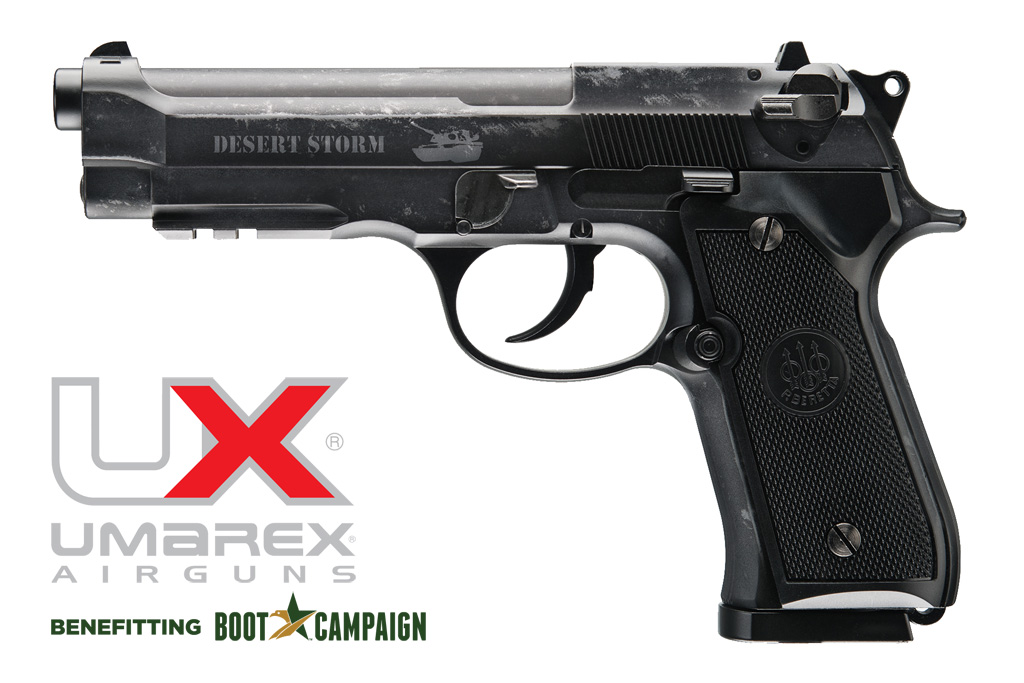 The 750 limited edition Desert Storm Beretta airguns will be available to order on a first-come-first-served basis to dealers who place an order at the 2016 Shooting Hunting & Outdoor Trade Show (SHOT Show®). Orders will be taken at the Umarex booth (#15062), in Las Vegas from January 19 to January 21. Dealers are limited to 30 guns and they are expected to sell out quickly.

A portion of proceeds will benefit Boot Campaign, a national non-profit charity dedicated to promote patriotism for America and our military community; raise awareness of the unique challenges service members face during and post-service; and provide assistance to military personnel, past and present, and their families.

Adam Blalock, President and CEO of Umarex USA, Inc. said, “This month marks the 25th anniversary of Operation Desert Storm. Because a Beretta M9 was the then-issued sidearm of the U.S. Military, it only seemed fitting that an Umarex-made Beretta, with proceeds benefitting the Boot Campaign, be used to commemorate those who served during that period in our country’s history.”

This is the third consecutive year that Umarex USA has offered a limited edition commemorative. At the 2014 SHOT Show®, a Colt 1911 commemorating World War II was offered and in 2015 the Limited Edition U.S. Marshals Colt Peacemaker was offered. The Desert Storm Beretta will serve as a tribute to the warriors who served during Operation Desert Storm of the Gulf War. A portion of proceeds will go to the Boot Campaign to help connect the 99 percent of Americans who have never served in our country’s military with the one percent that have served.

Since 2010, Boot Campaign has raised more than $12 million dollars to provide veteran housing assistance; wellness and family support; career and education grants; and financial assistance. In that time, more than one million patriots have been awakened; those who have attended Boot Campaign events, purchased combat boots, and engaged on Boot Campaign social platforms have been enlightened to the challenges facing America’s active duty and veteran families.