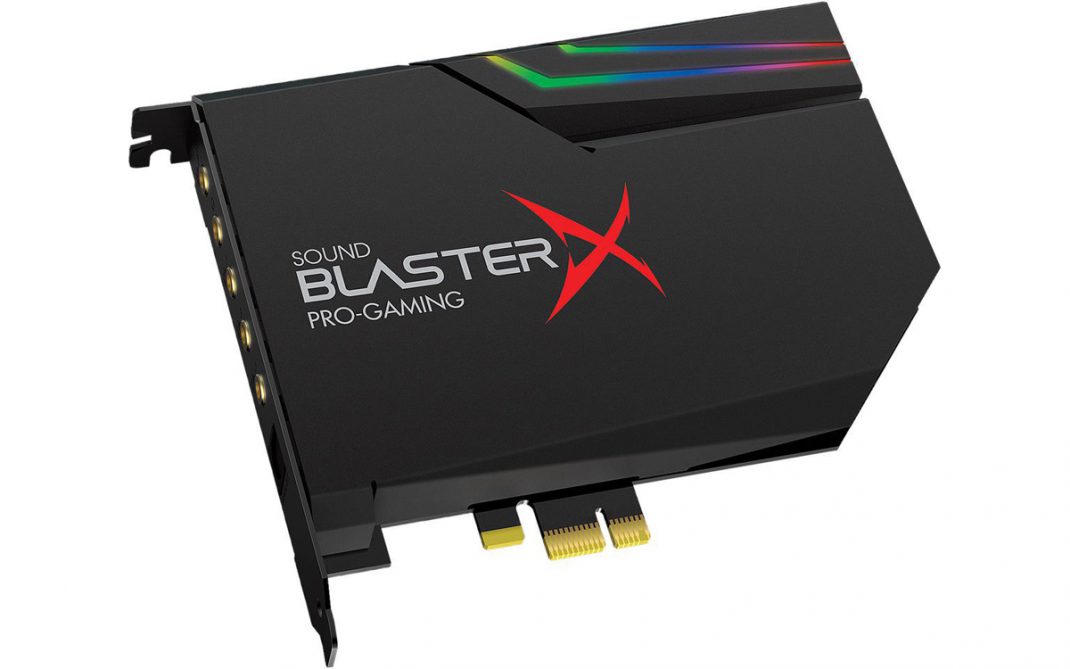 The Creative Labs Sound Blaster AE-5 sound card installs as one would expect. You insert the card into an available PCIe slot on your motherboard and screw it in place. The biggest change in the installation procedure for the AE-5 is completely optional, but really cool. The Sound Blaster AE-5 comes with a small LED light strip. This light strip connects to your sound card and then you plug one of your computer’s molex power cables a connector on the card itself. This LED light strip teams up with the RGB lighting on the sound card itself in what Creative Labs is calling the Aurora Reactive Lighting System. This lighting system displays 16.8 million colors and can be set to change or react when specific events occur. The small LED light strip has a magnetic backing that allows you to place it wherever you prefer within your PC case. After the hardware stuff is taken care of, you simply download the software from Creative Labs website and off you go. Overall, the installation process is pretty simple. 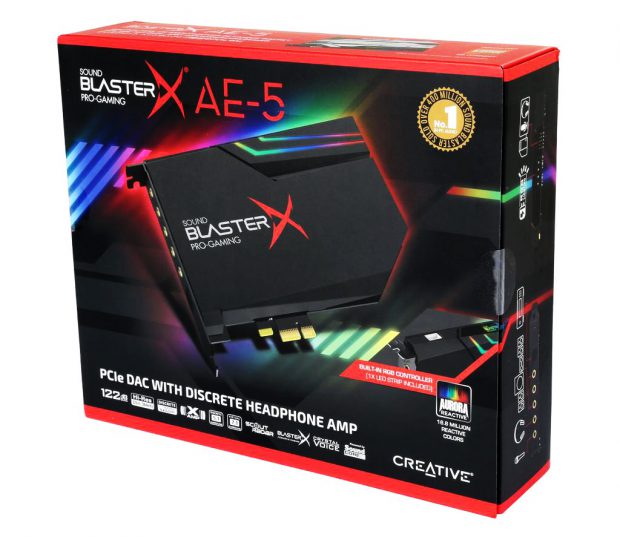 Once your software is installed, it’s time to start playing some games or listening to music. I am happy to report that the Sound Blaster AE-5 is one stout audio performer, capable of sending out some great music or game sounds for your listening enjoyment. It can do this because of several technological features that Creative Labs has built into the card.

The first technical feature of note on the Sound Blaster AE-5 is its Xamp discrete headphone amplifier. This Xamp is pretty cool in that, unlike many sound card headphone amps, it individually amplifies both left and right channels, allows for great sound on high-end headphones that are capable of up to 600ohm. Now THAT’s “HiFi”! Unfortunately, we do not have a set of hifi headphones to try this feature out on. But, it sounds really cool!

If you don’t care about headphone amplification, you might like to know about its DAC unit. The Sound Blaster AE-5 features a SABER32 Ultra Class DAC (digital audio controller). This DAC is touted as delivering up to 32-bit, 384kHz playback with 122dB DNR. I ran through a number of games with the AE-5: Fallout 4, Divinity: Original Sin II, EVE Online, and many more. I was satisfied with the sound of every game I played and I can attest to both the clarity and power of the audio produced. The AE-5 also allows for very convincing virtual 7.1 channel surround sound, so if you prefer your computer gaming with that kind of sound scape, the AE-5 will make it happen. I was also very happy with its performance while listening to music albums from my iTunes library. Metallica, Alanis Morissette, and even Weird Al Yankovich. I have a lot of albums from a variety of musical genres in my playlist. The AE-5 ran through them all perfectly. I would recommend switching over to the “Concert” EQ setting in the Sound Blaster software for music listening. 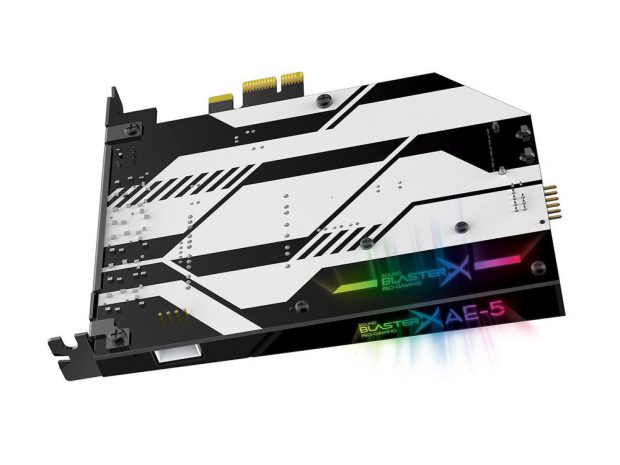 The Sound Blaster Connect 2 software suite used to configure the Sound Blaster AE-5 can also be used to control and configure your other new Creative Labs peripherals. I love that this software functions as a central hub for controlling your Creative devices and it makes some really great sense on their part to make it function this way. Going further into the software behind the AE-5 is what Creative Labs calls “Scout 2.0”. Scout 2.0 allows you to visualize the direction a sound is coming from in your favorite first-person shooter title by way of a special utility. If you are featuring your AE-5 on a computer being used in a tournament, please make sure they allow the Scout 2.0 utility before playing. Gotta follow the rules! A final note on the software is that its EQ settings are pretty fantastic. It has a ton of presets for a huge game library. Don’t agree with the preset? Feel free to adjust it! The sound profile is pretty flexible.

So, now for the not-so-great news. While the Sound Blaster AE-5 does allow for discrete 5.1 channel surround sound, it does not support onboard Dolby Digital decoding. So, if you are purchasing this for a home theater setup, you might make sure you don’t require Dolby Digital features prior to purchase or have an optical cable to pass the sound into a decoder of your own. If you don’t need Dolby Digital, I can safely say you will love the Sound Blaster AE-5. For a long while I had gone with just using discrete sound on my motherboard for audio output. After listening to my games and movies on the AE-5, I’m never going back.

For a very affordable $149.99, you can purchase the Creative Labs Sound Blaster AE-5 today from online retailers like Amazon and Newegg. Of course, you can also purchase it directly through Creative Labs on their official website.