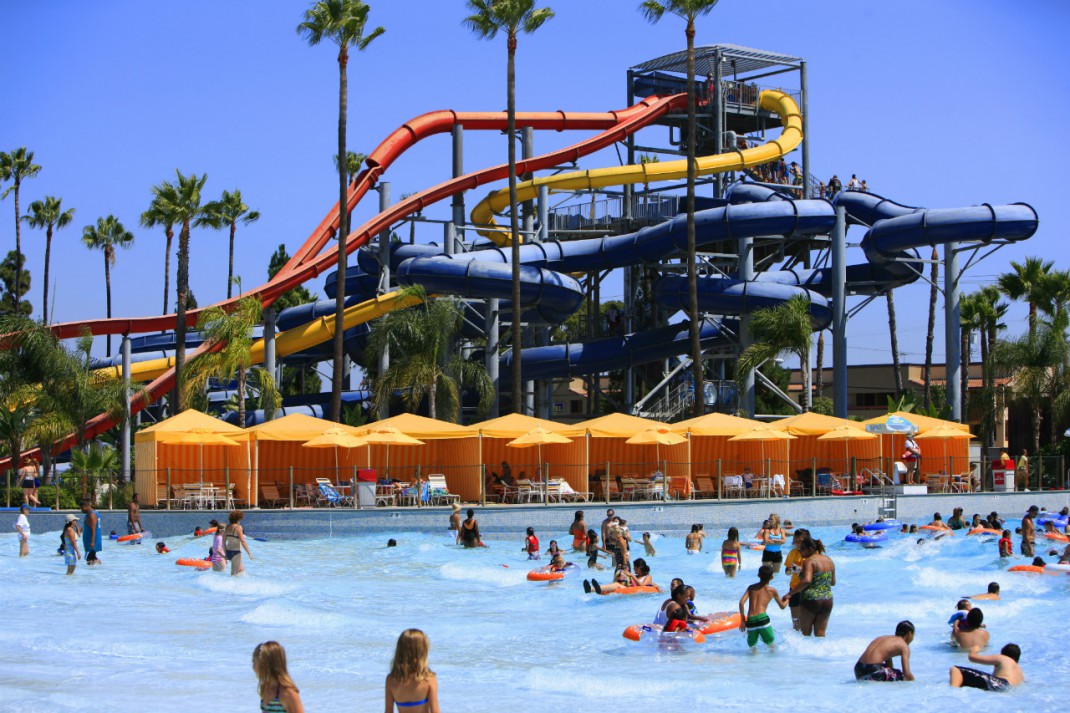 BUENA PARK, Calif. (May 2016) – Knott’s Soak City has opened its gates for daily operation of Orange County’s premier waterpark. Located just steps from Knott’s Berry Farm theme park, the 13 acre Soak City is the perfect destination for a day of fun. The water park is colorfully adorned with 1950s theming inspired by surf towns of the California coast. The water slides and attractions at Knott’s Soak City pay tribute to the area’s rich surfing heritage with names like Malibu Run and Laguna Storm Watch Tower. And like those at Knott’s theme park, the slides and attractions at Knott’s Soak City are truly world-class.

Pacific Spin is Soak City’s most action-packed water adventure, carrying passengers at a maximum speed of 35 feet per second. This thrilling multi-person raft ride includes a 132-foot long tunnel that drops its riders 75 feet into a six-story funnel. After pitching riders back and forth through swirling water, the ride culminates in a waterfall splash. Guests with the need for more speed can brave the waves from high atop Old Man Falls or race friends headfirst on a mat down the multi-lane speed slides of Banzai Falls. Take in the summer sun and conquer the swells of the Tidal Wave Bay Wavepool. In addition, the park’s figure-eight Sunset River is one of the longest water park lazy rivers anywhere.

With 35 semi-private cabanas available for rent by the day, guests can have it made in the shade. Soak City cabanas are furnished with lounge chairs and an umbrella shaded table, and offer waiter service and free inner tube rentals. Cabana reservations can be made at soakcityoc.com.

Every Friday, Saturday and Sunday June 24 – August 7, plus Monday July 4, all 2016 Knott’s Soak City, Gold and Platinum Season Passholders can enter the water park half an hour before it opens to all other guests with exclusive early entry starting at 9:30 a.m.

Knott’s Soak City holds the distinction of being one of the safest water parks in the United States. For the 15th consecutive year, the lifeguard staff of Soak City has been awarded the Platinum National Aquatic Safety Award for consistently exceeding the criteria for aquatic safety. The award is granted only to facilities scoring in the top eight percent of the audit criteria as established by Jeff Ellis & Associates, a leader in aquatic safety consulting for water parks worldwide.

Guests can maximize their summertime fun by upgrading to a Gold Season Pass to ride and slide at both Knott’s Berry Farm and Knott’s Soak City every day of the 2016 season. A Gold Season Pass is $114.00 or 6 payments of $19.00 when purchased online now through May 30, 2016. The best prices for daily tickets can be found online at soakcityoc.com.

Operating days, hours and prices vary and are subject to change. For date-specific information visit www.soakcityoc.com. And join the conversation by using #SoakCityOC.