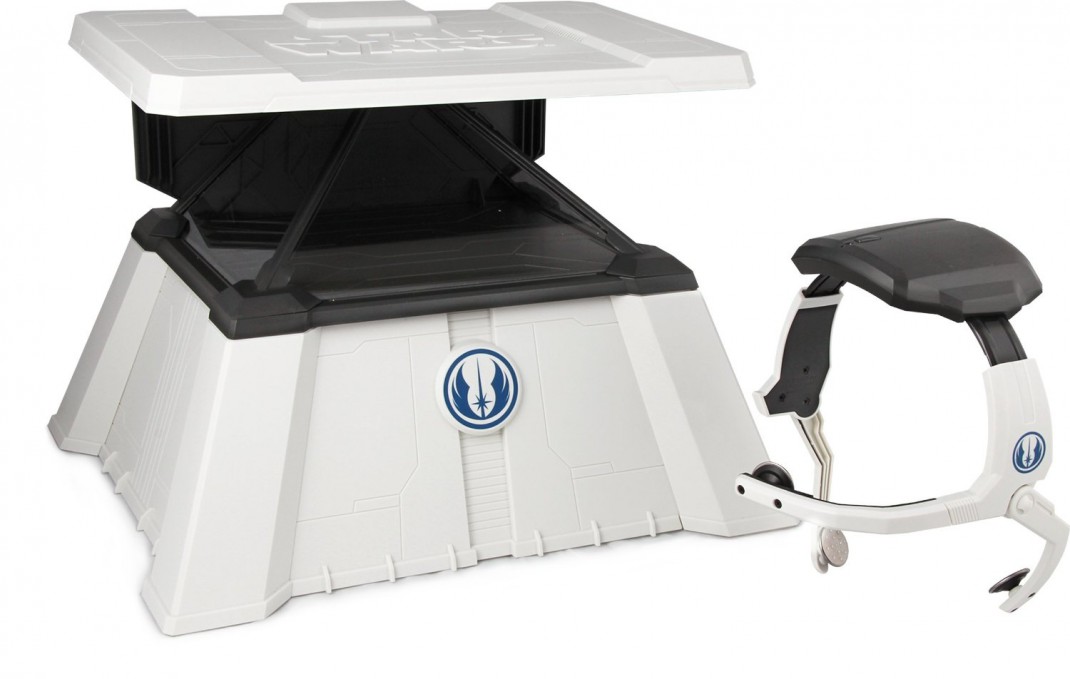 Star Wars Episode VII: The Force Awakens is upon us and what better way to celebrate it than with a review of the Star Wars Force Trainer II: Hologram Experience by Uncle Milton. Science and science fiction collide in this latest Force Trainer that promises future Episode VII content while providing real science fun.

Using The Force:
The first Star Wars Force Trainer used a combination of an old NASA endurance test with the latest science to provide an interesting but limited experience. When I was younger they came out with a toy that was supposed to be able to read brainwaves but in reality only read movements of the muscles on your scalp when you grimaced concentrating. The Force Trainer actually reads the brains Beta waves and translates your concentration level to a device using a Bluetooth connection. This part of the original Force Trainer was pretty cool but then it was hooked up to a ball in a beaker that would float higher the more you concentrated (NASA used to use a similar ball and tube in old lung capacity tests). This was pretty cool for a while but it can get boring just watching a ball float. So they came up with the design for the Star Wars Force Trainer II using the same science and a very old stage trick. 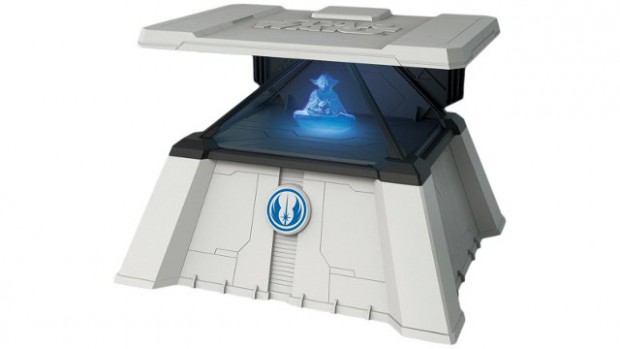 The base and source of the very Star Wars looking hologram actually dates back to the mid 1500s when a scientist realized that object reflected onto tilted glass could make things look like they were in places they actually weren’t, particularly people.  This later became known as a “Pepper’s Ghost” and is used in teleprompters in television stations and, more notably, in Disney’s Haunted Mansion with the ghosts in the ballroom set. In this case, the image reflects from your iPad onto the glass and makes it look like the image is inside the box instead of reflecting off it. This brings up the point that the lower the light in the room the better the effect works and also make sure the brightness on your iPad is all the way up.

Getting started requires the base to be put together which can take about 15 minutes for an adult and would probably get broken by a kid.  Then the iPad needs to be sync’d up to the Bluetooth headset. So, if you are buying this for Christmas, you may want to wrap the box but have the assembled toy somewhere else already put together to avoid impatient kids.  Don’t be surprised if the reflective plastic pieces are also scratched, it seems to be a common issue but doesn’t really affect the hologram.

Once you get everything put together you need to fit the headset on which only requires some minor adjusting, the key being that the three connections need to make direct contact with the skin in the locations indicated on the diagram, if you are a bit off or there is too much hair in the way then the headset will have constant connection issues.  If you are hairy like me you might have that problem anyways, I really needed to get a haircut and a trim up off the ears and it would have been less frustrating. 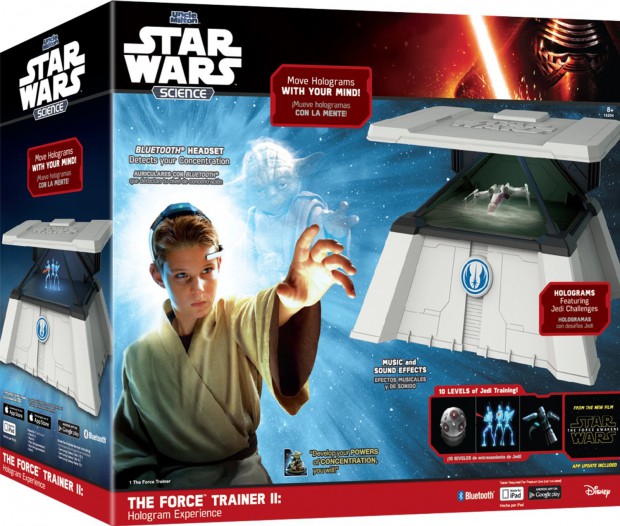 Once everything is setup on the base with the iPad in place and the headset adorned it’s just a matter of tapping the iPad screen and away you go.  It starts off pretty easy with some levels that are designed to help you figure out how to concentrate just the right way to make the device work. The headset detects Beta wave brain activity which is present when someone is alert, active, concentrating or anxious. So when my cat woke me up at 4:30 in the morning I became anxious and active and decided to see if I could get alert and concentrating to follow suit.

So first couple of levels are pretty easy once you get a feel for how you have to concentrate. When growing up imagining the Force we always imagined you just thought push really hard with your mind and it would happen which isn’t how this works at all. You can think push all you like but the real results come when you just try concentrating on the item on the screen. When you have to move an item up and down the screen the more you concentrate the higher it goes, the less the lower it goes much like the ball in the original Force Trainer. When you need to do a force push you just look at the object on the screen and concentrate with all you got. If you aren’t used to concentrating on things so hard this shouldn’t be done for extended periods of time, it might give you a headache from the effort but it is also exercising your brain and the more you level up the stronger you ability to concentrate can get. 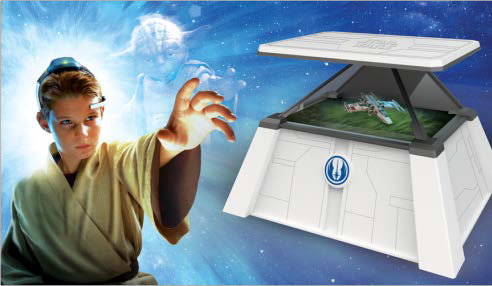 You are rewarded with moments from the movie as you go from level to level. You start out trying to move the Force training ball that gave Luke some decent jolts during his training, find yourself lifting and X-wing from a bog and fighting droids. If you work at it you can find yourself up against Darth Vader himself and then… well the game has 8 Padawan levels, 9 Jedi levels, and 10 Jedi Master levels with promises of more levels and Star Wars Episode VII: The Force Awakens content in the future. The really great thing about this game being powered by a mobile app is that once you have all the parts the only limitation on level expansion is what Uncle Milton is willing to give us. In theory, there will hopefully be more content as the movies continue, maybe even more tie-ins to the already released films.

Star Wars Force Trainer II: Hologram Experience is a vast improvement over the first edition – it is a great educational tool while also being a fun game for all ages. Don’t play it for hours on end at a time but the more you play it the better your concentration and alertness becomes. The levels have built-in replayability and continuing challenge with the prospect of more play expansions coming in the future.  Just make sure you have your iPad fully charged because once the scoring competition kicks in among the players time with fly by.