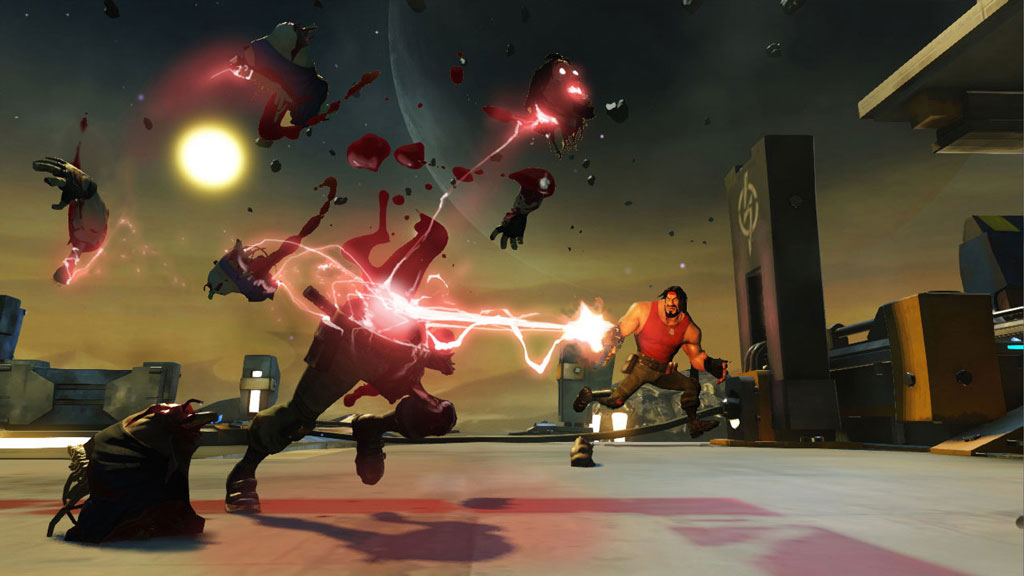 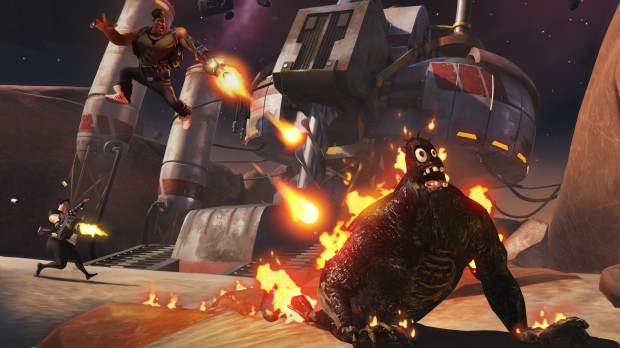 Edge of Reality has brought us a brand new, free to play, third person shooter called Loadout. What separates Loadout from other third person shooters is the custom weapons that players can design, test, and then use in the game’s arenas. Loadout’s design is completely on the side of “over the top” when it comes to its humor, gore, and weapon design. Edge of Reality went with the idea that, if it’s worth doing, it’s worth over doing and it works for Loadout.

Here’s the thing about Loadout’s story line: There isn’t one. Not a scrap of story to be found anywhere in this game, and I am fine with that. Some games can carry themselves just purely on fun gameplay, and that is exactly what Loadout does.

When you begin the game, you have to set up your first loadout. These loadouts consist of a character skin and two weapons. The characters that you can choose from are limited to one of three skins; beefy white guy, beefy black guy, or beefy white girl. The default skins offer no customization at all, unless you buy the Spacebux from Edge of Reality. I will get into that a little more later.

Loadout is really all about the weaponcrafting, and you get to carry two custom weapons in each loadout. You begin by selecting one of four chassis, either beam, missile, slug or pulse. The chassis determines how the basic gun will behave. After you have selected the basic chassis, then you are ready to add on more parts to further customize your weapon. You can change the barrel, magazine, stock, scope, ammo, and other parts to truly customize your weapon. The more you level up, the more choices you will be given. Here’s the cool thing, you pay for your upgrades with currency that you earn in game, not the purchasable Spacebux.

What I really liked about the weapon customization was how Edge of Reality would let you outfit your gun and test it prior to spending one point of currency. You can choose all the available upgrades that you want to see how they work, then hit test and are sent to a single player shooting range. You get to see the damage that your new weapon can deal on stationary and moving targets, and then decide on whether or not that configuration will work for you. It’s never final until you hit the buy button. 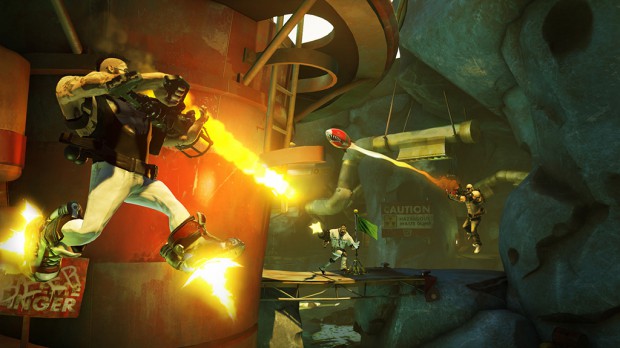 Since I’ve already touched on it twice, let’s get the free to play thing out of the way. Edge of Reality has done Loadout’s free to play model right, in my opinion. You can purchase Spacebux with real currency, but what Spacebux can buy are customization options for your character or experience boosts, which has no advantage during the actual gameplay. Everything that you need to customize your weapons and increase your firepower is bought with in game currency, therefore Loadout is absolutely not a pay to win game. You have the same chance of winning and killing others as someone of equal level that has spent hundreds of dollars in Spacebux, you just don’t look as good. The customization options for your characters range from absolutely silly, hardcore military style, to just hard to watch. I played against a character that choose the naked skin costume, and it was disturbing to see his pixelated man bits flopping around. I personally went with the Baseball Furies costume from The Warriors, oh yeah.

Ok, that’s four paragraphs right there on the customization of Loadout, so let’s talk about how the dang game actually plays. Currently, I could only enter the casual game modes and not the competitive ones, but there were still a few modes to choose from. There is Death Snatch (kill confirmed), Jackhammer (capture the flag), Extraction (collect the shiny bits and run to a set point), and finally Blitz (control point). These games are all set for 4 vs 4 action, or 4 vs AI if you are looking for some cooperation gameplay with your friends. I generally just looked for random games and game types, and was consistently put into full games where the action was fast and fun.

Actual gameplay is a blast and reminds me of the old Unreal 2k3 days. With only two weapons, your loadout becomes extremely important but you can also pick up other people’s guns after you have blasted them into itty bitty pieces. Jumping is a viable dodge technique, as is the actual double tap to dodge, so get used to aiming at bouncing characters. Maps are designed well, with side passages to sneak up on people. I feel that the maps are the right size most of the time, though I hated that sometimes in Blitz one team had no chance just because the control point spawned near someone that was already there.

Loadout is over the top gore and humor at it’s finest for a free to play game. Weapons will literally blow parts off of you in a shower of cartoony blood and bits. A hard enough shot that doesn’t kill you will completely damage your character. A head shot will just leave you with your brain and two eyes on eyestalks, or a chest wound can leave you running around with a large hole where your pecs used to be. If the shot does kill you, well then you are usually torn in half, or found hopping around on a bloody stump as you bleed out. Occasionally your character, if he or she is feeling especially full of it, will end his or her last breath by giving the enemy the finger before quietly passing on. 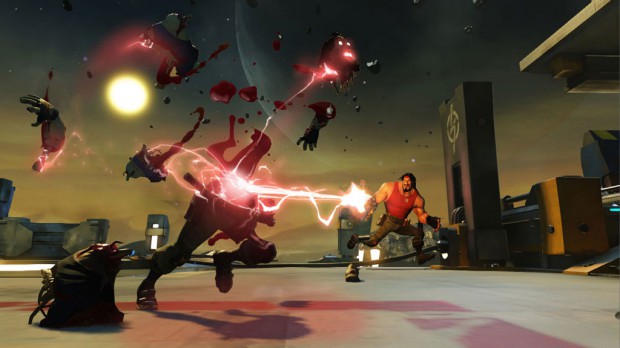 Sound is really well done to, but a little minimal when you really analyze it. There is no music during the actual gameplay, so sound effects is usually just weapon fire, explosions or heart beats when you get low on health. Voice acting is limited to just grunts, groans and yells for the characters, and announcement from the female narrator ala The Administrator from Team Fortress 2.

Loadout from Edge of Reality is how free to play game should be done. You can play the game without spending a single dollar and still be competitive and have fun, you just won’t have access to the myriad of great clothes options or taunts that the Spacebux can buy you. If you want a slick costume and really customize your character, then be prepared to shell out some real life dough. If not, then just be content with the default character. Gameplay wise, Loadout is just damn fun, it really is. I played Unreal 2k3 for hours upon hours because of how fun that game is, and Loadout feels like a spiritual successor to that title. Match-ups worked fine for me, though I do know that Edge of Reality has some issues during the first day or so of launch. Edge of Reality has said that they are working hard to fix that issue and will make it up to everyone who was affected. Look, the game is free. You loose absolutely nothing in trying it, and I really think that most of you out there will actually enjoy it. Loadout is available now through Steam.