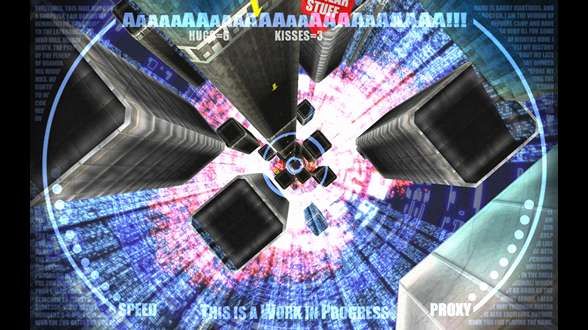 Ok much like the title this game doesn’t take itself too seriously, in fact it thrives on being silly and yet at the same time it is surprisingly challenging and addictive.  In 1982 Polystructures fall from space into the air over Boston and people take to populating them and building around them.  By the year 2011 you can no longer look up from a city and see the stars, but you can look down from the top of the Polystructures and base jump off of them.  Hence a new dimensional timeline and  lifestyle is born.  Base jumping is literally taken to new heights as you leap down hugging and kissing the sides of building and other structures until you get to the bottom where you deploy your parachute fin before become a “sack of calcium” or a bunch of other amusing but dead options and try and land inside a red circle. 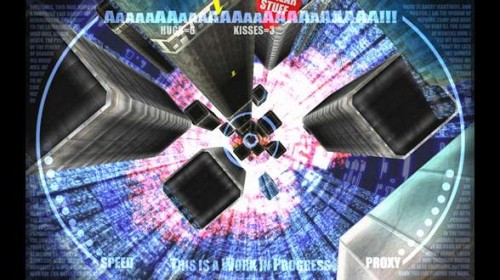 So for each time you succeed at hugging building, shattering glass panels with score values and landing without becoming mush you earn a score which is then applied to a star system.  The more stars you get for equaling or increasing your star rating on a map earns you teeth.  Yep, the currency of this dimension is teeth and the more you earn the more map drop points or special goodies you can unlock.  Now one person’s special goodies is anothers bizarre and just plain hilarious moment so make sure to spend your money wisely.  One of the unlocks, for example, is a glowing glove that makes it so that as you plummet past onlookers you can encourage your supporters with a thumb up or your protestors with a nice red glowing middle finger.  Another allows you to spray graffiti, remember you are doing all this while plummeting to the ground and dodging buildings and structures at an alarming rate.  If it all gets to be to much though you can listen to relaxation sessions (there are no insects on you… not on your face getting ready to crawl in your nose, not at all) or learn how to debristle a pig or get grandma’s special recipe for cookies (the secret ingredient is a dead relative’s ashes). 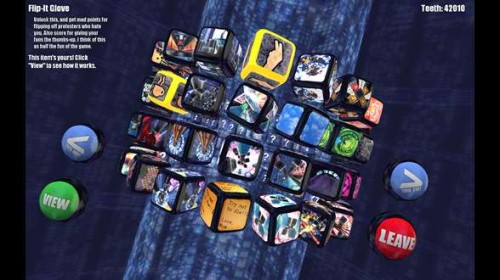 The wackiness of the game, the fact that no two jumps are ever the same and that this is a game with real skill and practice necessary to do good at it makes it addictive to watch and to play.  I was trying it out on the OnLive service and I was constantly getting spectators watching and would sometimes try (and sometimes fail) spectacular moves to entertain my audience.  I got friends request on the service as well by people who just wanted to be able to know when I would be on and playing it again.  This game is perfect for parties, it is so visually engaging and the difference between a high score and becoming a bunch of femur paste is the slightest of moves.  Also it is on OnLive so you can play the game on any PC anywhere, play it on tablets or use the tiny OnLive console and all you need to do is get it an internet connection and plug it into your TV and suddenly you can be playing it on a huge screen at someone else’s party.  The OnLive system lends itself to portability and versatility anyways but this game showcases it so nicely.  This next weekend I am heading out of town to visit friends and the OnLive system is going with me and going to get some serious play and I really see this game shining.

At first glance this game looks easy and silly, but it actually can be very challenging and no two jumps are exactly the same.  But it is also silly, and has as much fun with itself as possible.  If you have ever been interested in the history of base jumping there are factoids tucked in as well but this is really about having the American version of Monty Python-esque fun and laughing while sweating your jumps.  Dying doesn’t bother you, it makes you laugh.  My wife was at her computer laughing at the sound effects (there are old school arcade sounds in it very similar to Sonic) and the different odd things said in the game.  When she walked by she stopped and just started staring at my game like so many OnLive spectators drawn into the visuals as well as the sound.  This is a great party game which you can try for free at OnLive and it is included in the over 70 games on it’s play anytime PlayBundle so it would be at your leaping leisure for $10 a month.  I picked it because of it’s funny name to be honest and now it is in my regular play rotation.  Heck even the companies website is fun to go to!